Home Enigma The Strangest Photos from the Surface of Mars 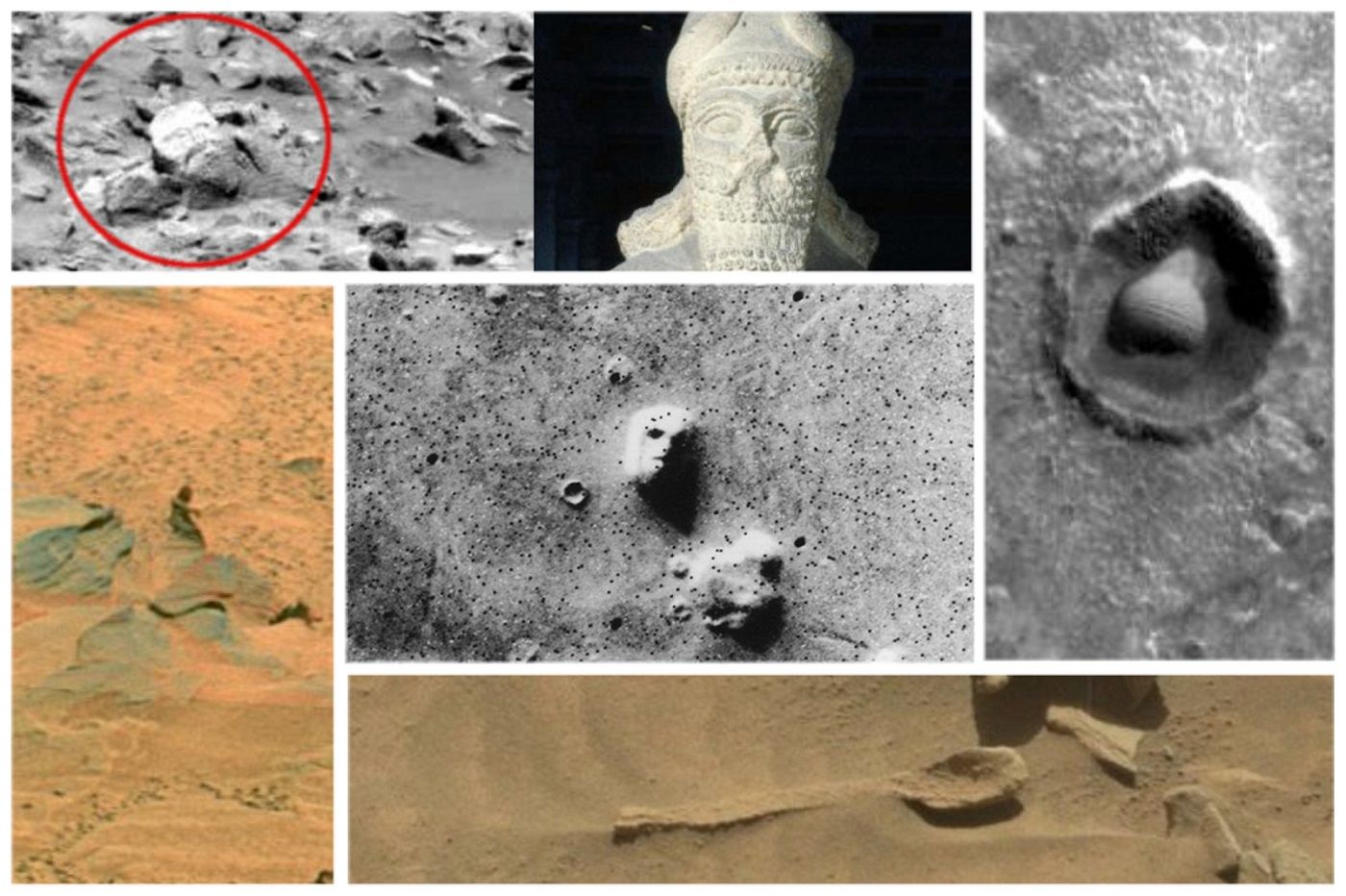 Thousands of photos have been taken from the surface of Mars by multiple robotic rovers and spacecraft in recent decades as part of the Mars Exploration Program. Many of these photographs are publicly available so people can analyze them thoroughly and sometimes even too eagerly. Over the years, there were numerous photographs that surfaced on the internet showing mysterious objects and features on the Red Planet.

As always, many people claim to see very intriguing things like animals, trees, man-made or even alien-made objects, while scientists provide boring scientific explanations. As often as not, both parties are convinced in their own theories because of the lack of evidence.

Regardless of what you believe, you will surely agree that some of the photographs are pretty mysterious. We present to you a small collection of the strangest photos from the surface of Mars.

The face of a god 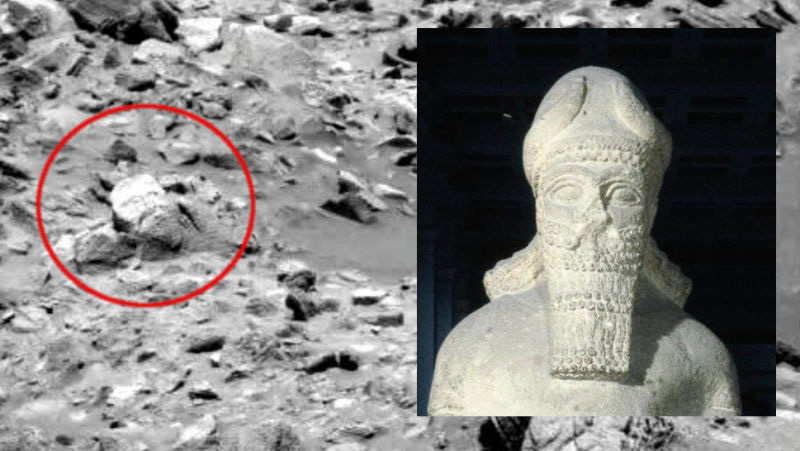 This photo was taken by NASA’s rover Opportunity in 2010 at the place called Concepción Crater. UFOlogists found that this rock (or a part of a statue) resembles a Mesopotamian/Neo-Assyrian sculpture, namely an attendant god dedicated to Nabu by Adad-Nirari III and Sammuramat. 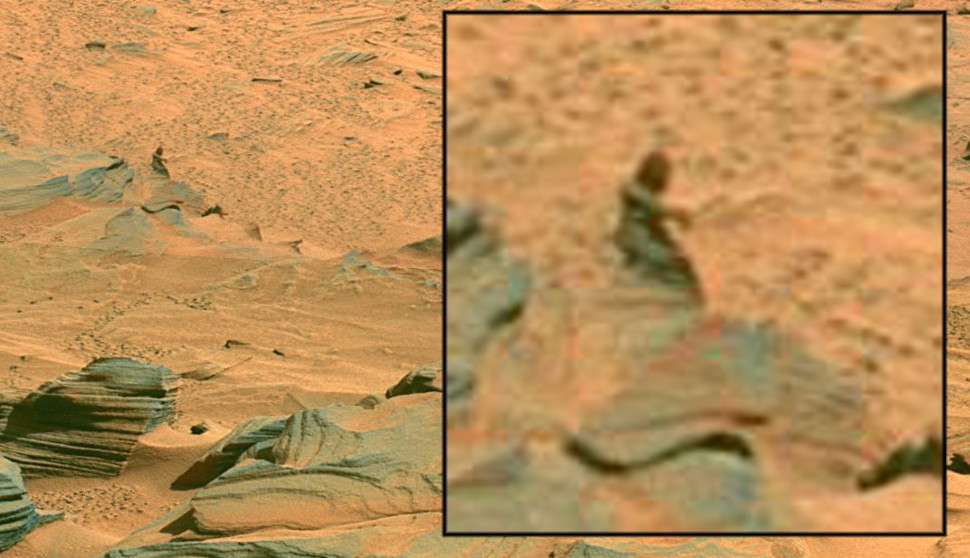 This panoramic view of the Gusev Crated contains a rather spooky element. The official explanation is that this is a strangely positioned rock, even though it most definitely looks like a Martian zombie woman wearing a dress and walking with her arm in front of her. But what are the chances of that? 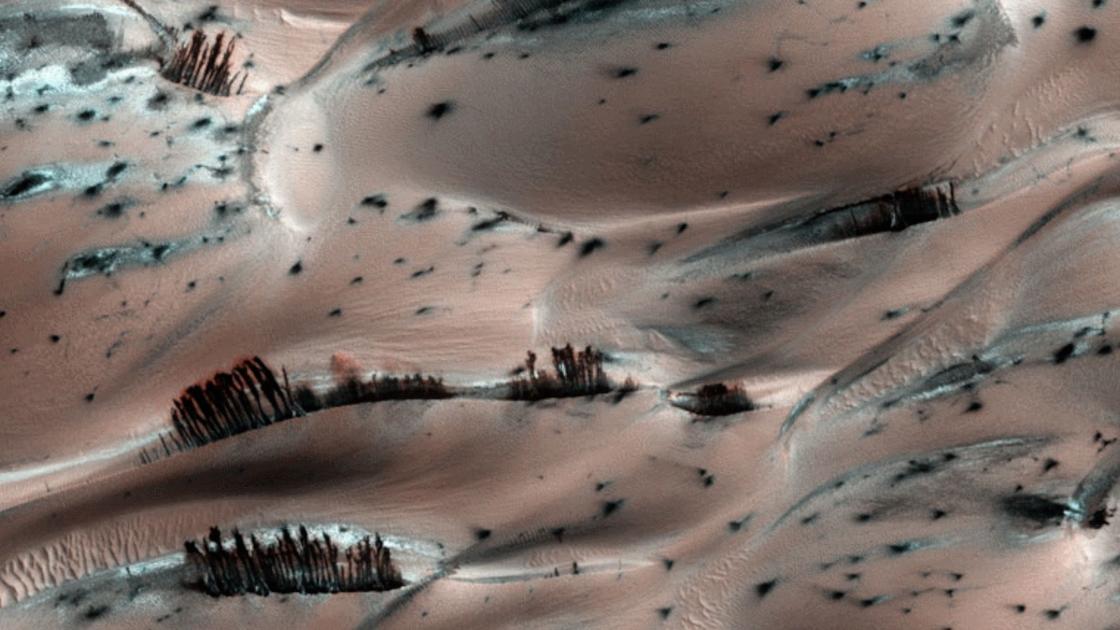 The vista near the north pole contains structures that look remarkably like trees. The scientific explanation by NASA is a bit difficult to understand but they say that the Martian “trees” are dark basaltic sand pushed to the surface of sand dunes by sun-heated solid carbon dioxide ice or dry ice. When this sublimates directly into vapor at the surface it leaves the dark sand to slide down the bright frosted portion of the dune. Got it? 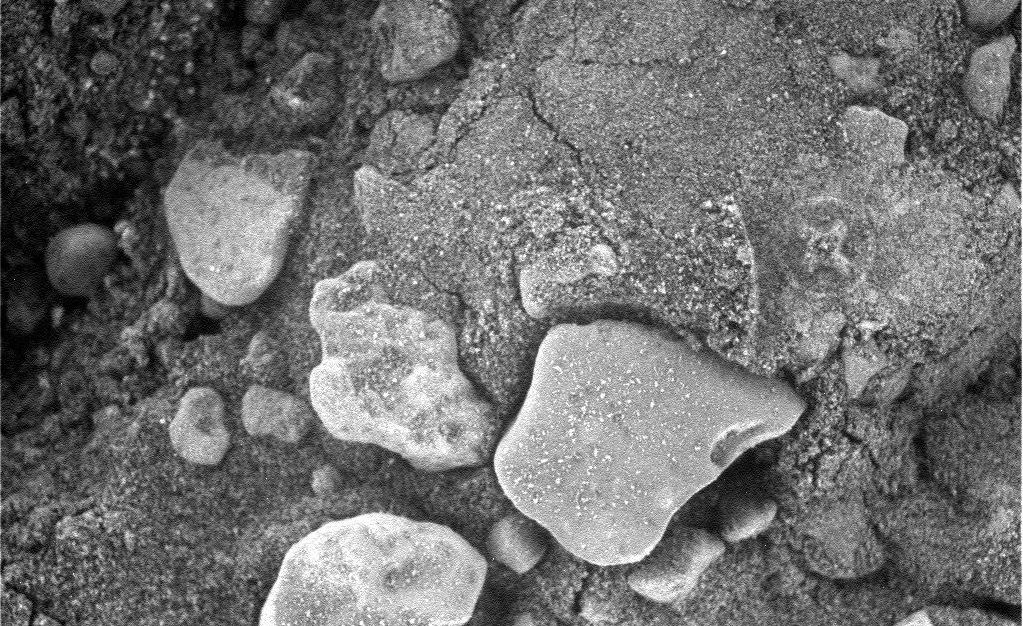 This photo appears to show a seal impression of a Celtic cross on a piece of sand or rock. It was taken by the Opportunity rover on July 11, 2014. One of the possible explanations given by the skeptics was that it is a screw imprint from the rover itself. More accurately, it could have been made by the scientific instrument rover called the APXS, which stands for Alpha Particle X-Ray Spectrometer, which is described as a “contact” instrument. 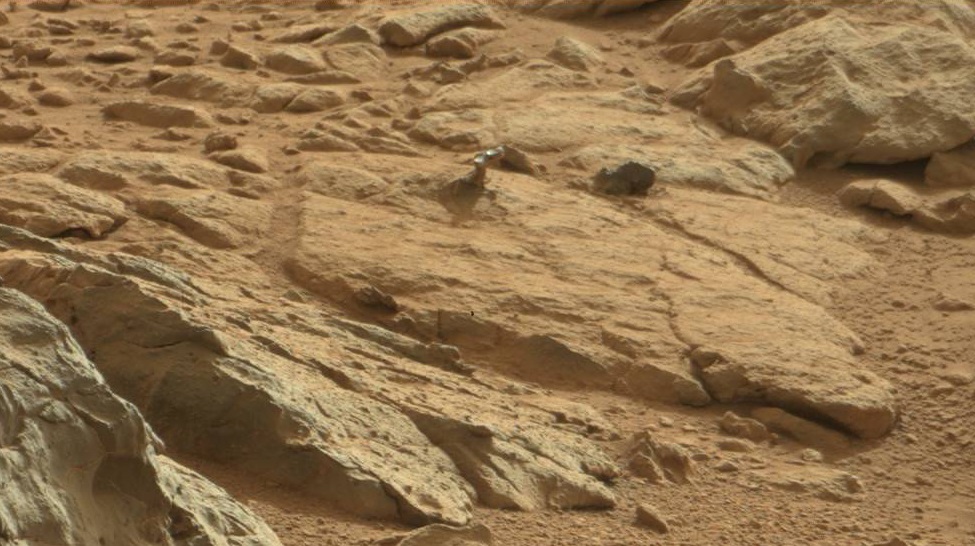 This interesting object certainly stands out from the rest of the mundane rocks. One could even say that it looks like a robotic arm or another piece of machinery half-buried in the ground. Scientists say it is most likely a meteorite or just a weird-shaped rock!? The photo was captured by Curiosity in early 2013. 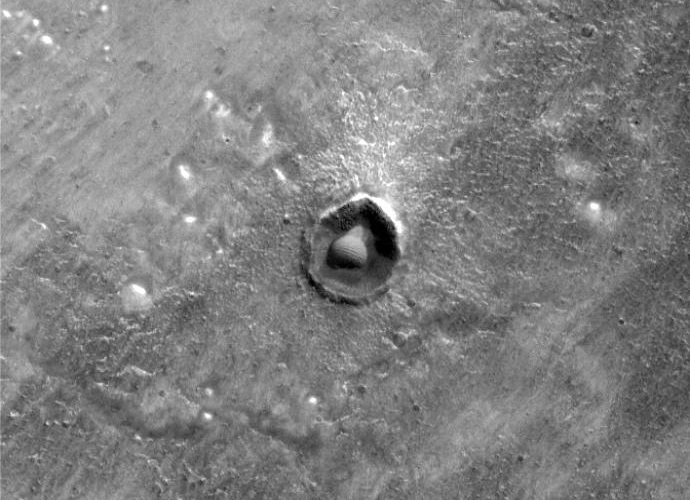 What happens when Miley Cyrus goes to Mars? ^ This ^ She just came in like a wrecking ball. Yeah, I know that it wasn’t funny. Nevertheless, this oddly shaped crater was photographed by the Mars Global Surveyor. While a crater on the Red Planet is nothing spectacular, a perfectly shaped ball inside of it is quite interesting. People from the internet say that it could be a dome or a Buckminster Fuller geodesic construction to be more precise. 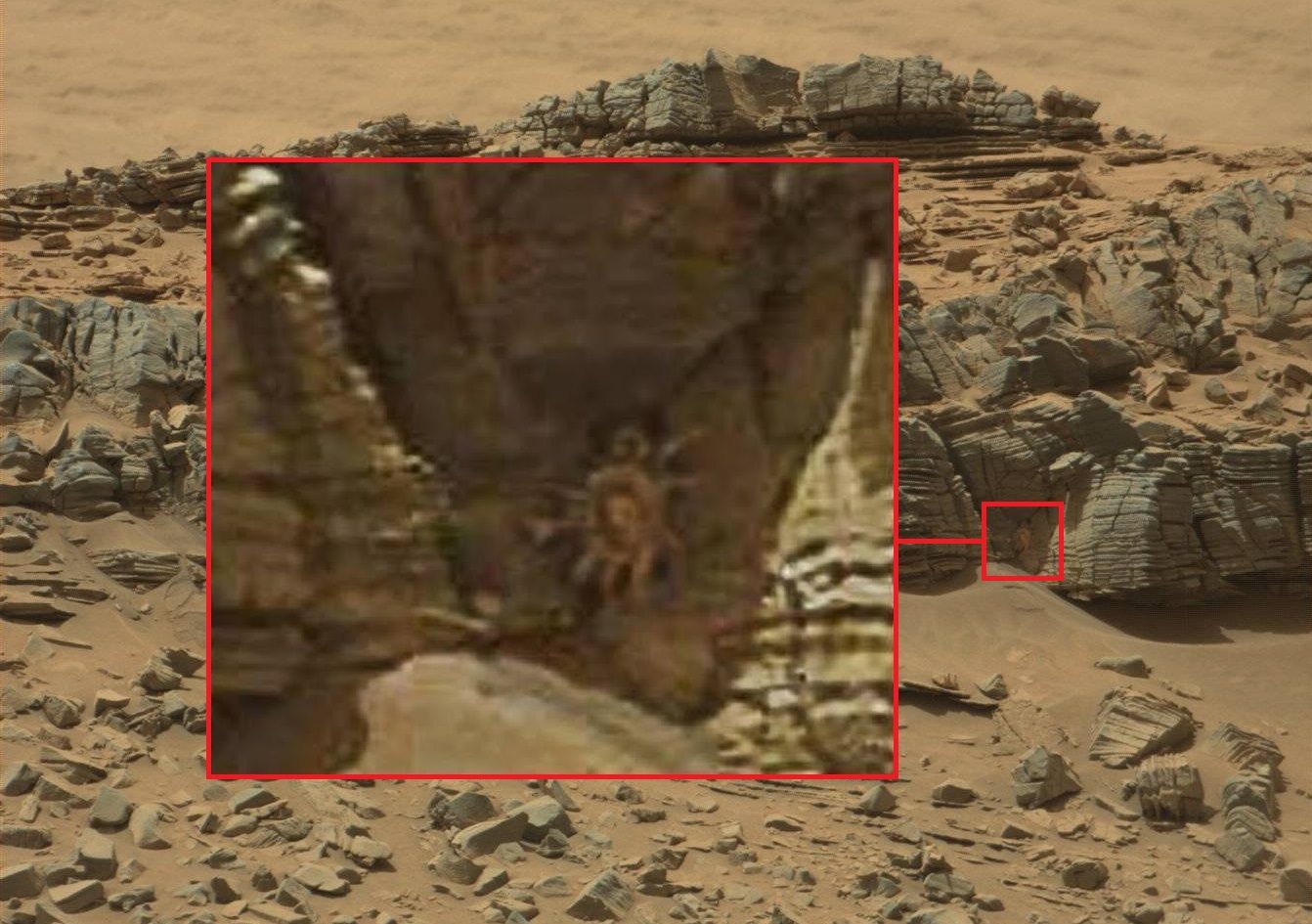 This surely looks like some Martian animal right? Most likely a crab. There is no way that this is just another weathered rock. Oh wait, that’s what scientists said yet again. But what about those “hands”, pincers or whatever? Yup, just a weird rock. Really? 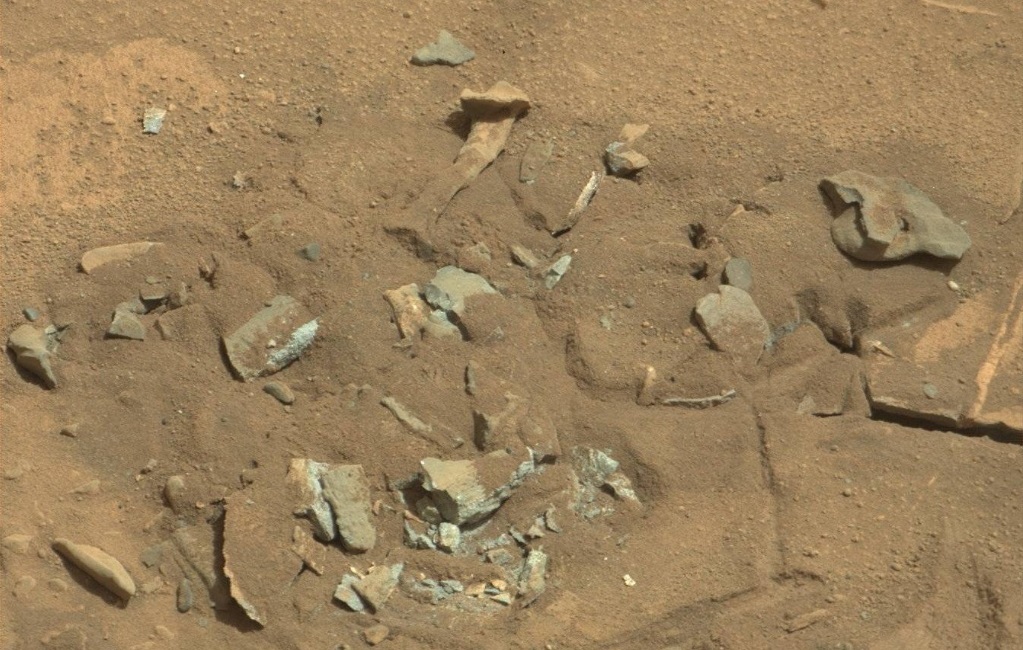 When NASA’s Curiosity rover took this photo in 2014, people immediately noticed the weird object that seems like a human or even a Martian thigh bone. NASA on the other hand tried to convince everyone that it is just a weathered Martian rock. “Mission science team members think its shape is likely sculpted by erosion, either wind or water.” These are not real blueberries of course, but they certainly have a similar shape. They were first noticed in 2004 by Opportunity in an area at Meridiani Planum. The strange round objects were called ‘spherules’ by NASA researchers. They varied in size, but the average diameter was a few millimeters. Many years later, scientists cannot say for sure what are they and how they were formed. The most popular theories include hematite concretions, spheres produced by meteorite impacts, and balls that formed from calcite minerals.

The light in the distance Curiosity took an interesting photo of the Kimberley Waypoint in Gale Crater in 2016. Once published, everybody noticed a strange light off in the distance. Conspiracy theorists believed that this was evidence of an alien civilization that either visited the Red Planet or dwelled beneath the surface. The scientific explanation said that the speck of light was likely caused by a cosmic ray, which created a visual artifact on the photograph.

A spoon on Mars Although unlikely, this definitely looks like a spoon. Perhaps some ancient Martians ate soup for dinner, who knows? The photo was taken by NASA’s Curiosity rover in 2016. Humans allegedly tend to assign familiar characteristics to random objects, a phenomenon called “pareidolia.”

Is that a squirrel on the surface of Mars? There between the rocks you can see a beautiful Martian squirrel in its natural habitat. At least that is the theory that is popular on the internet. Can you see it? Yeah, it’s a bit camouflaged of course.

The Face on Mars This is one of the most iconic photos from Mars that sparked countless debates. It was taken back in 1976 by NASA’s Viking 1 probe. This feature measures 2 miles long (more than 3 km) and many people believed it to be a monument from a long-lost Martian civilization. The official explanation stated that it is just a huge rock that resembles a human head with the shadows giving the illusion of eyes, nose and mouth.

Spirals on the surface of Mars There are places on the surface of Mars like Athabasca Valles that contain these intriguing spirals. Hundreds of these spirals have been identified by researches on Earth. They appear to be intentionally made by someone or something at first glance. The unusual features confound scientists as well as they are unlike anything seen on our planet. The two most likely theories according to them include hardening of a massive lava flow or ice floes from an ancient inland sea. December 5, 2018
The average day is actually 23 hours, 56 minutes and 4.09 seconds. We have a leap year every four years to make up for this shortfall.